This Sunday, like all Sundays, in another mass I will not be attending, there is a space of prayer between the creed and the offering of bread and wine. Catholics call this the Prayers of the Faithful. A man has had surgery. Someone’s baby died. A priest has gone away for a family visit in another country–Italy, Romania, Argentina. The war continues. There are homeless. Repairing a leak in the church will cost $700. Often there is a petition for “those who have lost their faith” to return. Lord hear our prayer. Lord have mercy.

As Pope Francis visits the U.S. for the first time, I think of the “lapsed” and excommunicated. I think of those Catholics who (like me) don’t attend church anymore except (maybe) on Ash Wednesday or Christmas or when family comes to visit. Occasionally, on our own, we may slip in unceremoniously at the back, relegating ourselves to an easy-exit corner in one of the last twelve pews. Some of us never step into line at communion time, or else we genuflect and vanish from the pew just as ministers step forward towards the congregation: a swish of certainty in their rayon robe-hems, their hands carrying goblet-like ciboriums filled with brittle wafers.

Somewhere between belief and the body of Christ, the unfaithful offer their presence–if not their prayers, too, however fragmented and skittish. We are the strays.

There are a lot of us around, people with different histories and different reasons for existing along the fringes of the church. It might be a falling out with a priest over something real gone wrong: a wedding, a burial, a divorce, a rejection during a most intimate confession. Maybe it’s a stubborn and unresolved doubt or a weird blend of obedience (“I know it’s the rule”) and defiance (“I’m breaking it”) about sexual activity. Strays like to sleep in on Sunday, so there can be a dose of laziness, too. For some, there is little rest because the scars of grave trauma remain.

Like the famous postcard felines of Rome, we forage along the boulevards and ruined things, in the courtyards and on restaurant patios, on the rooftops near rain gutters, in parking lots. Crowds make us nervous, but we also recognize safety in numbers. When the bells toll, when Papa speaks, our ears do prick up—though we may stroll the opposite way.

Still: a stray may seek out an empty church. Finding the front doors bolted, she goes to the side entrance or cozies up to the janitor with the brooms and mops and floor polisher machine. A stray drops coins in the metal box and lights (or, these days, clicks on) a votive to leave behind. We mark the church as our territory, too.

Unlike those who joke that they are “recovering” or now adamantly atheist, strays are not usually advertising. We’re more conflicted than self-congratulatory about leaving or standing outside the church. We recognize each other in code—a glimpsed rosary in the purse, a certain turn of phrase or humor, a solemn nod when someone shares a story of the priest who made his mother cry in the rectory. Perhaps we exude a kind of religious pheromone, whether or not we feel safe enough to self-identify.

After I read a preview from my forthcoming book MASS at a summer writers’ conference, a fellow nonfiction writer, a friendly but virtual stranger, sat down in the empty chair next to me during a break. I had shared an excerpt that included images of the Latin altar rituals that predated my experience as a kid. We sat there, shoulders not quite touching, looking at the empty lectern with its reading lamp. As people milled past us, he shared quietly how he hadn’t been practicing for a long time, but he had been an altar boy, he remembered the experience with all his senses, he was still drawn back sometimes, somehow, and it was an odd but unshakable thing.

We got up and walked to the bar where there was more noise. We bought glasses (bottles, maybe) of beer. I don’t remember if we toasted. Then each of us disappeared back into the crowd again.

A stray attunes her senses to reminders of what feels familiar, but new contexts (or de-contexts) are not threatening. Defying simple superstition, she may develop attachment to particular objects. On my desk at home, for example, I keep a very old statue of St. Teresa of Avila made almost a hundred years ago by craftsmen at Las Artes Religiosas in Olot, Spain. A mixture of wood and gesso, she is missing her right arm and hand—presumably the one where a dove might sit, as pictures often show, or where she would also poise a quill. There are two holes in the back of her head, where a halo was once attached. In her left hand, she holds an open book whose pages are partly chipped away. 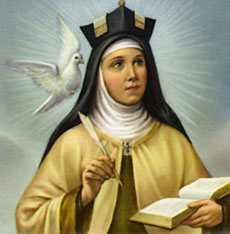 Teresa’s official story embodies the opposite of anything stray. She was embraced and “approved” through canonization. She is also recognized as a doctor of the church, making her one of the few female saints honored for mysticism and authorship rather than martyrdom or motherhood.

But here, next to my window, she stands in the brown Carmelite tunic and white cloak (now darkened by generations of dust and oil) and wearing a biretta on her head. Her body is maimed nearly to the shoulder, but her glass eyes remain clear. She may have been kept in a convent or on a chapel shelf in the last century, but this version of Teresa has not been contained—she migrated (escaped?) to Southern California.

“Stray” can be a transitory condition, and there are strays inside the church, too. Unlike the Spanish Teresa born a century earlier, Sor Juana Inez de la Cruz of Mexico was never canonized. Sor Juana was born out of wedlock. Legend says that, as a child, she hid in a chapel to read forbidden books in peace. Adopted into a family of privilege, she asked her mother if she could disguise herself as a man in order to enter university. Despite suitors, she chose life in a convent as an alternative to marriage. Once she arrived there, she didn’t write love letters to Jesus, but poems publicly challenging bishops and calling out men for sexual hypocrisy. By the end of her life, she was pressured to stop writing, and she died of plague while caring for other nuns who had the disease. Her face now hides in plain sight across Mexico on the 200 peso note, her story lurking inside billfolds and clay jars and cash registers.

Strays may cheer on the known Catholic dissenters—priests and nuns, or ex-priests and ex-nuns—who have risked their privileges to speak out about about war, poverty, contraception, the exclusion of women from ministry, and of course sexual abuse. But while open agitation is inspiring, the stray approach is often less externally confrontational, a bit more cryptic and practical. We are tired of the same old arguments, and we know that survival depends on more than words alone. We see that structures themselves are slow to change.

Pope Francis seems to show the stray instinct. Maybe you have seen the pictures of him in plain black garb, on a subway or a bus. Maybe you have heard about how he snuck out to meet with people in Rome in the first days of his papacy. How he sleeps in an apartment rather than the palace. How he seeks to mix with crowds during public visits. Francis is also the first Pope to hail from Latin America, which is now the demographic center of Catholicism. The church has “stray” tendencies and influences, if only its leaders would honor rather contain, suppress, or smother them. But the colonial, imperial structures of Catholicism remain a troubling and violent legacy. However kind and open Francis may be personally, he will also this week officially canonize Father Junipero Serra, famous for establishing Spanish missions–and for “Christianizing” native peoples–along the margins of the California coast. As a stray, I do not see this as a comforting signal. During nearly four years of research for MASS, this particular stray met and interviewed many priests. I recognized my peculiar position, the moments of initial mutual suspicion. But most of these men were incredibly candid in their answers and generous with their time. They have known lots of people like me. They have struggled with their own questions. Some expressed stray elements in themselves—a recognition of the gap between strict theological rules and decent daily life. Some remain in their role after six decades; others walked away or asked to be released from their clerical obligations in order to marry, or because they were gay and sick of hiding.

Several men stated that Francis is their great hope, but they, too, are guarded in expecting too much from good feelings. They have been down this road before. Almost exactly fifty years ago, in October 1965, just before the hopeful close of Vatican II, Pope Paul VI visited the US—the first pontiff ever to do so. LIFE magazine published a photo of his convertible driving into Yankee Stadium. In the image, he stands in the moving car with arms open towards a sea of young clerics in white surplices, the back of his scarlet cloak towards an ocean of laypeople. The wave of euphoria and anticipation crashed into that divide three years later, when Paul VI released his encyclical letter Humanae Vitae, declaring artificial birth control to be sinful. Argentina’s Jorge Bergoglio, elected Pope Francis I (C) appears at the window of St Peter’s Basilica’s balcony after being elected the 266th pope of the Roman Catholic Church on March 13, 2013 at the Vatican. AFP PHOTO / ANDREAS SOLARO (used under Creative Commons license from Diariocritico de Venezuela)

I hope that, as shepherd-in-chief, Francis sees that the strays hovering cautiously at the edges of the flock do not necessarily view themselves as poor little lambs. Can Francis see that we are engaged in our own ways from outside the center? (Does he know who lights so many of those candles in all those churches?) Maybe strays have not lost their way. Maybe they are finding it, leading from the margins. What if Pope Francis can enter that fringe without appropriating it? I want to believe he can.

For now, I wait and see. Strays have been taken in before by smiles, by soft words. It would be a mistake to assume that we want to be gathered up and carried in among the sheep, to be assured that we can be absolved from things that we do not feel the need to repent.

The prayers of the unfaithful must also be heard. We know what shepherds are ultimately for, and that the destiny of the lamb is not a happy one. We have learned all too well what empires do with their strays. But we have claws when we need them. We bite when we have to.