I’m walking down an empty, dark street in Alphabet City somewhere in the East Village of Lower Manhattan. I’m looking for Slugs’ in the Far East, the coolest jazz club in New York, at 242 East Third Street between Avenues B and C. Hence the moniker “Alphabet City.” It’s the late 1960s and the neighborhood is run down and dilapidated, sporting six-floor walkup tenement buildings with broken windows, a preying ground for desperate junkies who rove the streets like hungry jackals. I’m still a college student, but I’m in the process of metamorphosing from a Baby Boom suburban kid into a freewheelin’ artiste. Jazz is my road to freedom. 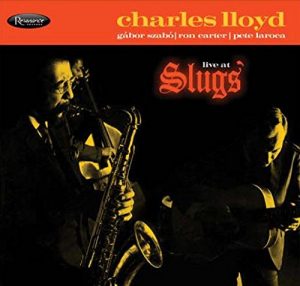 Slugs’ was opened in 1964 by jazz-lovers, Jerry Schultz and Robert Schoenholt, and on Monday nights, it’s home to Sun Ra and his Intergalactic Research Arkestra. Sun Ra is far out and Slugs’ has become the hip jazz mecca and alternative dive for musicians in the know, on the other side of town from the Village Vanguard and Village Gate in the West Village and the bebop clubs that have been closed uptown on 52nd Street. The jazz is seldom pretty or commercial at Slugs’, but if you’re brave enough to make your way there, you can hear progressive jazz giants like Jackie McLean, Charles Lloyd, Freddie Hubbard, Wayne Shorter, Herbie Hancock, Keith Jarrett, Roy Haynes, and Yusef Lateef. The most important avant-garde jazz musicians are also welcome at Slugs’ — Archie Shepp, Ornette Coleman, Albert Ayler, and Sun Ra all call this place home — and the music plays until 4 a.m. nightly. Everybody who plays Slugs’ is… “happening.”

Unfortunately, there are no subway stops within 3-4 blocks of Slugs’, and since there are no ride-sharing services like Uber or Lyft in 1968, if you don’t take a taxi (and most won’t drive you to Alphabet City), you have to walk… through this dangerous no man’s land of abandoned syringes and skulking, drug-lit dealers and desperados. But that’s part of the bad boy allure of Slugs’…walking through levels of purgatory to finally get to the gates of the jazz underworld.

I’m walking…. briskly…. along East Third Street on a frigid Friday night. There’s not another human being in sight.

It’s winter time, between Thanksgiving and Christmas. Did I say it’s cold? Maybe as Adlai Stevenson, the U.N Ambassador, said at the time, “hell has frozen over”. Suddenly I hear footsteps behind me. I speed up. The footsteps speed up behind me. I shove my hands into my old gray tweed winter coat, and I break into a trot. Just as suddenly, a scruffy bearded man steps out of a doorway in front of me. I stop in front of him. The footsteps behind me catch up and I’m trapped and accosted by two “residents” of Alphabet City. Their hands are in their pockets. What kind of need have driven these men to this moment?

“Whataya got for us, man?” The scruffy bearded guy in front of me asks menacingly.

What the fuck, Trules? What kind of “fine mess” have you gotten yourself into? Just like Oliver Hardy always asks his helpless sidekick, Stan Laurel. But that’s the movies; this is real life.

I take out my wallet. “I have about forty dollars, guys. But I was going to Slugs’. Do you know where it is?”

“Yeah, kid. It’s about five doors straight up. You almost made it.” 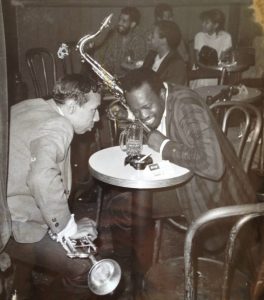 What does that mean? “Almost made it?” Are they gonna mug me and leave my body right there on the street?

I take out the money and start to hand it over to them.

“You mind if I keep ten bucks to get in the club? I’ve been traveling an hour and a half.”

They snicker to each other. Maybe junkies don’t exactly care about my jazz education and personal evolution.

“Hey!” A big burly black man yells at us from just up the street. He starts running at the three of us full speed. I don’t know what’s happening. I drop to the ground.

The guy who was following me grabs half the money out of my hand, and he and his partner in crime scamper off down Third Street, back to the holes from where they came.

“You alright?” The big black man asks me.

The big dude is the bouncer, and he just might have saved my life… or at least my admission price and a drink at the bar.

“Thanks,” I say. He takes my money and lets me in the club.

It’s dark and narrow. Bare brick walls, long before they became fashionably chic. Hanging dim-lit globe light fixtures, sawdust and peanuts all over the floor, probably covering up the concrete cracks and vomit on the floor. Definitely not West Side.

But the hard jazz and bop are blaring. I’ve made it. To Slugs’ in the Far East, Daddio! The long, old-fashioned bar is on the left. You have to walk past it to get to the beat up tables and the “bandstand”, which is at the very end of the narrow room. Not elevated, nothing fancy.

I’ve come to see Charles Mingus, the stand-up bass jazz titan of the era. He’s a composer as well as a player, and his sound is a little dissonant for me. Still, I’m digging it, having survived my half mugging, while I’m milking my one gin and tonic at the bar.

Mingus takes a break. A guy slides into the empty bar seat next to me. Before I know it, I’m surrounded by a gaggle of hipsters and musicians on all sides. The guy next to me is dressed in all in black, open shirt with a big gold chain. He must be impervious to winter. He’s wearing snake skin cowboy boots. Everyone is talking at him at the same time.

He seems disconnected, not interested. But finally, he responds… in this unforgettable raspy croak.“Yeah, man… whatever, whatever.” Like a sleek lizard with a throaty curse. Sitting next to me on a bar stool at Slugs’. I want to move, get out of his way. I’m not supposed to be here. I’m way out of my element. But I can’t move. I surrounded in this press… into Miles. I can feel its gravitational force. I trapped.

“Miles” this. “Miles” that. It’s like I’ve be thrust into a circle of jazz royalty. I actually don’t think anyone sees me, sitting there at the bar, next to… this jazz god. I’m just me, a college kid on Thanksgiving break from the University of Buffalo. I took the Long Island Railroad into Manhattan from Westbury in Nassau County. I have to take it back in an hour. Somehow make my way over to the subway without getting mugged again.

But right now… I’m an invisible demi-god, sitting on a bar stool next to Miles Davis at Slugs’ in the Far East.

No doubt, this is a highlight of my life that I’ll always remember. The rasp. The power. The charisma. One day when I’m 70, I’ll be telling my adopted 10 year old Indonesian son all about it. Even though he won’t be impressed or know what the hell I’m talking about. 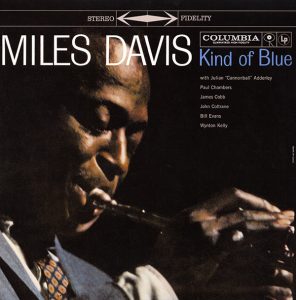 “Pak Trules, that’s just another story from your century. I don’t know who Miles Smiles is.”

“It’s Miles Davis, little man. Not Miles Smiles, although that’s the name of one of his famous albums, from 1967. How did you know that?”

But that’s another story altogether. How I married an Indonesian woman from Sumatra in 2003 and how we adopted our 8 year old Indonesian nephew in 2016.

But still, it was a little like jazz…. improvised and unpredictable…

Just like getting mugged in Alphabet City on my way to meeting Miles at… Slugs’ in the Far East.

If you’d like to travel more with Trules, listen to his Podcast, “e-travels with e. trules” HERE.