I don’t know about you, but I was raised to be a good kid. As a child of the 50s and 60s, that meant: going to school, getting good grades, being honest with your parents, getting into the finest college, graduating Cum Laude, becoming a doctor, working hard, getting married, buying a house, having children, making lots of money, retiring and having grandchildren. No one mentioned the bumps on the road: puberty, adolescence, repaying student loans, dating, co-dependence, landing a job, changes of career, changes of cities, sickness, divorce, doing taxes, Medicare, 401(k)s, disappearing pensions, getting old, cancer, or… death.

Actually, I don’t think that’s changed much over my 68 years on the planet, through the march of generations of Baby Boomers, Gen X-ers, Gen Y-ers, Gen Z-ers, or Millennials. Across the board, it seems that our parents, elders, and teachers just didn’t educate or prepare us sufficiently for the intricacies and difficulties of life. There was “the American Dream” and not much else. Sure, there was social protest for a time instead of today’s omnipresent and consuming technology, but kids always were, and always will be, kids, no matter which generation they’re from. And I still think their most difficult job is to “find themselves”.

I also think it’s a shame that kids these days “find themselves” so pessimistic about their futures. That they’re told that they will be the first generation to be “worse off” than their parents. That Social Security will run out, that war, greed, gun violence, overpopulation, environmental deterioration, racism, and bigotry all rule the day. That their representatives, their neighbors, their corporations, and their governments can’t be trusted. That there is no guarantee that a college education will land them a job. That they should be prepared for having not just five different jobs over their lifetimes, but five different careers, if they’re lucky enough to be consistently employed. There’s not much reason for, nor do many of them have much… hope.

And given that lay of the land, how are they to really “find themselves”? How was I able to do it? How could I, how can they, muster the courage, be brave, wise, or instinctual enough, to defy parental and conventional expectation, to take the road less traveled? To march to the beat of our own drummer? To find our own voices? To become uniquely ourselves? To find our purpose, our vision, to make our individual and collective contributions to the planet?

It was, and still is, hard. Nearly impossible. Most of us, even us “far out” hippies, failed to make the grade. We might have protested for a few years, some longer than others, but eventually most of us conformed. We became parents, then yuppies or buppies or bobos (bourgeois bohemians), then consumers, middle agers, old agers, and now unfortunately for my generation …  “it’s not dark yet, but it’s gettin’ there,” to quote the poet-sage of our age, Mr. Dylan.

But this is… a story of taking a road less traveled. Of a life lived outside of the norm. Outside the main stream of corporate and political America. Outside of conventional expectation and conformity. At a place called… MoMing. 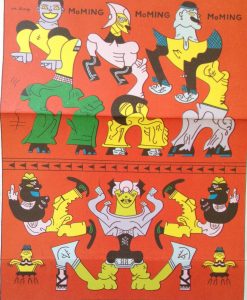 What the hell, you ask, is MoMing?

Is it a Chinese consortium? An idea? A collective? A building? A state of mind? A risk? A calling? An inspiration? Exactly what?

Well… as a wise old Chinese tai chi teacher once told a hungry, entangled, but confused young group of seven back in the day (1974): “There was once a lake so lovely in Guangzhou Province in south central China that it refused to be named. It was so beautiful that no one could agree on a name for it. And so…  it remained eternally “nameless”, a word that translates into Chinese as “MoMing”.

So that’s what we called the ourselves. And the place. MoMing. Nameless. A dance collective of seven and a building on the near North side of Chicago in the mid 1970s. A place where I “found myself”… where I grew into a young adult… where I became an artist… where I lived outside the laws of convention.

We were five dancers, one dance critic, and one entrepreneurial businessman. A collective. We had no boss. We were all equal… or at least that’s what we claimed. The dancers were Jim Self, the youngest of us who went on to dance with Merce Cunningham in New York; Jackie Radis, Jim’s one time high school dance teacher in Evanston, Illinois and who stayed longer than the rest of us; Kasia Minch, a graduate of the Art Institute of Chicago; Susan Kimmelman, whose alter ego was Max the Clown, who dressed in all black and was the saddest soul you ever saw; and yours Trulesly, a young volcano who dance allowed to erupt. Sally Banes was the young dance critic who went on to write for The Village Voice, and the entrepreneur was Tem Horwitz, who was Susan’s husband and who kept us afloat with brilliant grantsmanship and insightful arts management. We, The Artistic Seven, fought all the time. Amongst ourselves. We couldn’t even decide on a name. There were always factions and  mini-groups. We either had our own ideas or we took sides. That’s why we needed Mr. Lui, the tai chi teacher, to name us… “nameless.”

But we also pushed each other, challenged each other, stretched each other, and made each other grow. It’s where I learned to produce. To create my own dance-theater shows as a director and choreographer. Learned to teach clowning, which I had never studied, because the collective “asked” me to teach. Where I learned to write grants. Because the collective needed money. It’s where I stayed up all night long, sponging labels and licking stamps with six other spongers and lickers, to get the mailing list out in the morning. It’s where I sacrificed, argued, sweated, took class, taught class, cleaned toilets, swept floors, and went to sleep tired and rewarded every day.

I was never “supposed” to become a dancer, modern, or otherwise. I was supposed to become a “doctuh,” like all the rest of my baby boom Jewish tribe. But while most of my friends and classmates went on to law, medical, or some other graduate school, accepted jobs to avoid the Vietnam War, or fled the country, I got a high lottery number in the military draft, and hit the road after the college graduation I never attended. I drove up and down America like it was one big map until I ended up in the Windy City of Chicago.

I climbed a stairway, joined a dance troupe, and after four expansive, challenging, and transformative years learning to dance and make art with my body and mind, I left The Dance Troupe to co-found MoMing. I remember riding around on my bicycle in the Belmont-Sheffield neighborhood and finding a huge old, empty church rectory for rent at 1034 W. Barry. I remember laying down and screwing together our new collective, wooden dance floor, half the size of a football field. I remember the President of Columbia College Chicago, where we all worked for the Dance Department under choreographer and Director, Shirley Mordine, telling us, “You don’t have a chance,” when we all mutinied, left Shirley and Columbia, and started MoMing.

I remember, two years later, being included in the Chicago Reader’s “Heavy 75,” its prestigious list of “alternative” movers and shakers in the city. I remember slipping on a wet dance floor and dropping Susan Kimmelman on her face in the middle of our long clown duet, her finishing the performance bleeding from her mouth to the shock of the audience, and I remember having to look at the scar on her lip for the rest of our lives together. 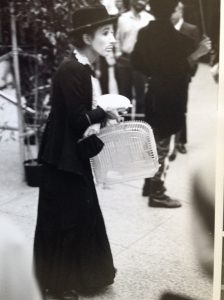 I remember the incestuous and polygamous fabric of the time when we all slept with each other, our students, our friends, our friends’ wives, and any attractive and willing waitresses on Lincoln Avenue, usually not at the same time, but usually and eventually, to deleterious effect. Women were newly empowered in the early 70s, gay people were coming out by the drove, and there was no AIDS menace yet on the horizon. I remember getting more than one woman pregnant, and watching more than one go through the awkwardness and pain of abortion, yet feeling no shame at the time. Years later, losing my fertility to Stage 3 lymphatic cancer and chemo therapy, I often think of the word karma.

MoMing was many of the things I mention above, except for maybe a “Chinese consortium.” It was my entry into young adulthood, where I was responsible for myself, for perhaps the first time. No longer in touch with my parents, having no school teachers, no director or boss, I had to make my own choices and live with the consequences, both good and bad. I was full of myself and my freedom, and that latter word, “freedom” became the most powerful and meaningful to me in all of the English language.

The sky was the limit, yet I was challenged and content being right where I was, in the moment. When friends and acquaintances asked me, “When are you going to New York?” I really had no answer or desire. I was happy being myself, becoming myself, one day, one year, one discovery at a time.

Because perhaps, that’s what “youth” is… seeing your future as unknown, but also unlimited. Seeing yourself as invincible. As hatched, but not yet free.

They say “youth is wasted on the young,” but I don’t think so. Youth is a “gift” to the young, a present of potential, a Pandora’s box of possibility. And the way I see it is that Pandora is not always an evil sorceress who unleashes the demon within, but sometimes she a powerful magician-esse who releases beautiful and liberating freedom.

The same way “MoMing” means nameless…. perhaps that’s what youth is too. Something unnamed, unformed as yet. Something intuited, something needed, felt, but not yet known. Youth has its genetic potential, like a caterpillar in a cocoon, but it’s up to the individual, with his or her choices, to cultivate that potential, to feed it, to nurture it, to “free” it to become a bold or timid butterfly.

Some things insist on being nameless. 1- Losing My Old Voice to Find a New One:

2- Finding My New Voice in the Windy City